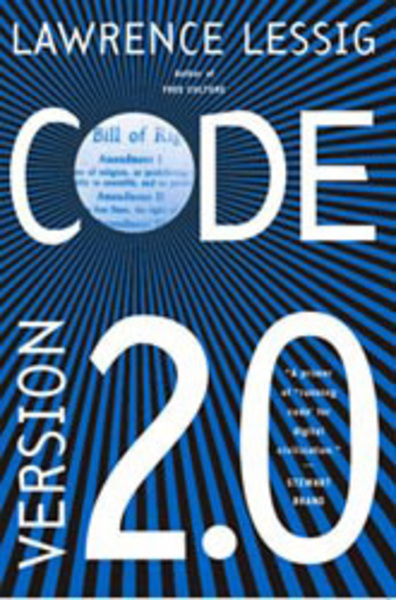 From the Preface: "This is a translation of an old book—indeed, in Internet time, it is a translation of an ancient text." That text is Lessig's "Code and Other Laws of Cyberspace." The second version of that book is "Code v2." The aim of Code v2 is to update the earlier work, making its argument more relevant to the current internet.

Code v2 was written in part through a collaborative Wiki. Lessig took the Wiki text as of 12/31/05, and then added his own edits. Code v2 is the result.

The Wiki text was licensed under a Creative Commons Attribution-ShareAlike 2.5 License. So too is the derivative. Reflecting the contributions of the community to this new work, all royalties have been dedicated to Creative Commons.

You can download the full text in PDF form. And obviously, you can also buy the book at the links to the right. (A wise choice, as it is cheaper than printing the book in most contexts.)

Lessig's "Code and Other Laws of Cyberspace" was published in 1999. The book quickly began to define a certain vocabulary for thinking about the regulation of cyberspace. More than any other social space, cyberspace would be controlled or not depending upon the architecture, or "code," of that space. And that meant regulators, and those seeking to protect cyberspace from at least some forms of regulation, needed to focus not just upon the work of legislators, but also the work of technologists.

Code v2 updates the original work. It is not, as Lessig writes in the preface, a "new work." Written in part collectively, through a Wiki hosted by JotSpot, the aim of the update was to recast the argument in the current context, and to clarify the argument where necessary.

While Lessig himself has strong views about preserving important liberties that cyberspace originally protected, this book does not push any particular set of values. Unlike Lessig's other books, The Future of Ideas, and Free Culture, this book has no particular political agenda. Instead, the objective of Code v1 and Code v2 is to introduce and defend a particular way of understanding regulation, and to describe the trend that we should expect regulation in cyberspace to take.

His conclusions are eclectic: Simple libertarianism will not preserve liberty in cyberspace. As the code changes in light of the values of both commerce and government, cyberspace will become an increasingly regulable space. The aim of anyone concerned to protect a particular mix of liberty in cyberspace must therefore account for this mixture of code and law that currently exist, and how it is likely to evolve. As he argues, that mix will tend to overprotect intellectual property. It will underprotect privacy. And paradoxically, the failure of effective regulation in the context of at least two speech contexts will tend to weaken free speech values in cyberspace. Finally, Lessig describes how the emerging architecture of the Internet will enable the reemergence of local regulation of behavior on the Internet.

Code v2 is licensed under a Creative Commons Attribution-ShareAlike 2.5 License license. It can therefore be freely downloaded and shared. Modifications must be similarly licensed. All royalties from the book will go to support Creative Commons. And the current version is now available on a wiki to be updated and corrected as the community of readers believes best.

Codev2 can be downloaded here.

Any derivative must be licensed under a Creative Commons Attribution-ShareAlike 2.5 License.

If you would like your remix to be posted on this page, send a note to [email protected]

To avoid the inevitable decay of the sources referenced in Code v2, I have moved the URLs to this site. Within the text, any URL has been replaced with a "link #". The links here correspond to that list. If the URL goes bad, the original source is cached at a fantastic new site called "WebCitation.org". WebCite makes it possible to cite a webpage, and they'll keep a cached copy for future reference. Their idea is fantastic and everyone should use it.