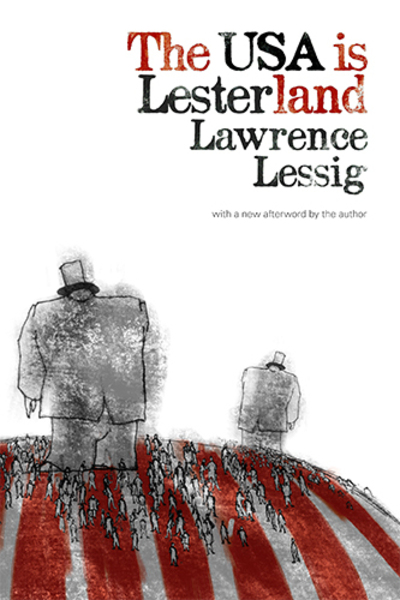 Building upon his TED talk (now with more than 1.2 million views), The USA is Lesterland captures the argument of the talk, and fills it out with detail and a clear way forward.

As Lessig describes, the key to the system of corruption that has now wrecked our government is the way candidates for Congress raise money to fund their campaigns. Members of Congress and candidates for Congress spend anywhere between 30% and 70% of their time raising money to get themselves elected or their party back in power. But they raise that money not from all of us. Instead, they raise that money from the tiniest fraction of the 1%. Less than 1/20th of 1% of America are the “relevant funders” of congressional campaigns. That means about 150,000 Americans, or about the same number who are named “Lester,” wield enormous power over this government. These “Lesters” determine this critical first election in every election cycle—the money election. Without them, few believe they have any chance to win. And certainly, neither party believes it can achieve a majority without answering the special demands these “funders” make. Our Congress has thus become dependent upon these funders. In this sense, we are now “Lesterland.”

This dependency, Lessig argues, is a “corruption” of the system our framers designed. Our Congress was to be “dependent on the People alone.” “Alone” and by “the People,” the framers meant, as Madison described, “the rich, nor more than the poor.” But instead of this exclusive dependence upon all of us, we have allowed our Congress to develop a different and conflicting dependence upon “the funders” of their campaigns. That conflicting dependence corrupts the framers’ design.

This corruption is not partisan. Both parties are responsible for allowing it to evolve. Yet neither principled Democrats nor principled Republicans gain from this corruption. The only interests who gain are the special interests which exploit this new funding dependency to bend our government away from the public interest and towards their own.

Only we, the People, can end this system of corruption. And we can only do this through extraordinary intervention in the way our politics works. This book maps a plan, updating the argument Lessig made in Republic, Lost (2011). The argument is essential, yet hopeful, as we still have the power to reclaim this Republic.

Organized by chapter, in this free podcast, Lessig reads The USA is Lesterland himself. As only an author can, his narration gives emphasis and emotion to this important argument, as he brings a otherwise esoteric question down to the ground. Regardless of your politics, the corruption that Lessig describes is the first issue that we, as a People, must solve. This short book describes the first essential steps.

Listen to the podcast »