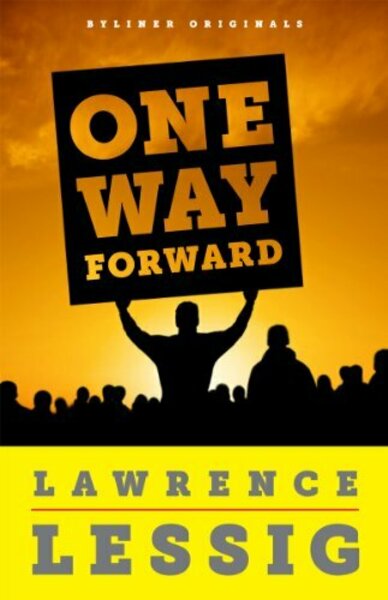 Something is clearly rotten in our Republic. Americans have lost faith in their politicians to a greater degree than ever, resigning themselves to “the best Congress money can buy,” as the comic Will Rogers once put it. It doesn’t matter whether they are Democrats or Republicans, people are disillusioned and angry as hell. They feel like outsiders in their own nation, powerless over their own lives, blocked from having a real voice in how they are governed.

But all of this can change—we have the power. Lawrence Lessig, the renowned Harvard Law School professor, political activist, and author of the bestselling “Republic, Lost,” presents a clear-eyed, bipartisan manifesto for revolution just when we need it the most. “One Way Forward” is a rousing, eloquent, and ultimately optimistic call to action for Americans of all political persuasions. Notable in these viciously partisan times, Lessig pitches his address equally to Occupy Wall Streeters, Tea Party Patriots, independents, anarchists, and baffled citizens of the American middle. Despite our serious political differences, he argues, we can—and must—change the system for the better.

At the core of our government, Lessig says, is “a legal corruption.” In other words: money. The job of politics has been left to a tiny slice of Americans who dominate campaign finance and exert a disproportionate influence on lawgivers as a result. This, he writes, “is a dynamic that would be obvious to Tony Soprano or Michael Corleone but that is sometimes obscure to political scientists: a protection racket that flourishes while our Republic burns.”

With the common-sense idealism of his hero, Henry David Thoreau, Lessig shows how Americans can take back their country, and he provides a concrete and surprisingly practical set of instructions for doing it.

In a season where Americans are poised between the hope for real change and the fear that, once again, they won’t get it, One Way Forward charts a course to a thrillingly new American future in which every citizen has a voice that matters, no matter how fat his or her wallet.